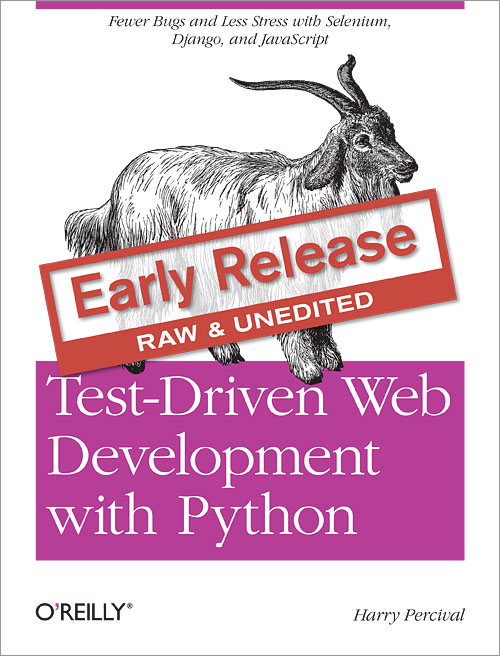 Here's the book on the O'Reilly Early Release program:

Buying direct from O'Reilly is probably the best option, they have DRM-free versions you can download in all sorts of formats (MOBI/epub/pdf)...

Alternatively, if you have an account on Safari, you can get it there too

Remember, this is an early draft, so expect the occasional rough edges... But I really, really want your feedback folks, so do let me know what you think -- here in the comments, in the comments on either site, or just by email to [email protected].

Thanks to everyone for your kind words of support, and thanks in advance for your help!

[update] -- in case it's not clear: if you buy this book now, either via O'Reilly or via Safari, you'll get updates from now on, as each new chapter is released, until the final version is released and you get the full copy. Anyone that provides feedback is totes getting a credit in the final book!

[update 2] -- naturally I assume you're all more than keen to pay for this book, but just as a matter of principle, there will be a Creative Commons, "try-before-you-buy", free version of the early drafts, released sometime in the near future. The final version of the book will also have a Creative Commons (NC-ND) digital version released on publication. And after 10 years, it will automatically revert to CC-0 Public Domain. But I (and my publishers) very much appreciate every single early sale!

[update 3] -- follow me on twitter @hjwp or sign up for this blog's updates to find out more about progress with the book, including when the CC version comes out... And, just let me know you're interested!

The book is available both for free and for money. It's all about TDD and Web programming. Read it here!

"Hands down the best teaching book I've ever read" — "Even the first 4 chapters were worth the money" — "Oh my gosh! This book is outstanding" — "The testing goat is my new friend" — Read more...

A selection of links and videos about TDD, not necessarily all mine, eg this tutorial at PyCon 2013, how to motivate coworkers to write unit tests, thoughts on Django's test tools, London-style TDD and more.

This is my old TDD tutorial, which follows along with the official Django tutorial, but with full TDD. It badly needs updating. Read the book instead!

Save the Testing Goat Campaign

The campaign page, preserved for history, which led to the glorious presence of the Testing Goat on the front of the book.